A. Make a Difference
B. Something To Think About

2. Comments
3. For Your Information 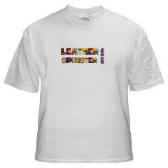 Do you ever think that one person really doesn't matter? Tabitha Brown proved that one perşson does matter.

It was 1846. She joined one of the wagon trains of adventurers hoping to start a life in Amerşica's west.

Grandma Brown, as she was affectionately called, was 62 years old, only five feet tall, and weighed all of 108 pounds when well fed. Beşcause she was partly paralyzed, she leaned on a cane and walked with a limp.

Along the way, she showed great courage and stamina. As she crossed the Great Plains and the Rocky Mountains, she nursed the wagon train's sick, though at one point, she neared starşvation herself after the caravanĺs catştle were rusştled off by Rogue River Indians.

Once they arrived in Oregon, she started one of the first schools in that part of the country. It was for all people, both rich and poor. The poor attended free while those who could afford paid a dollar a week for tuition and board.

As long as she was able, she worked to keep the institution alive. She atştended to the stuşdents. She convinced would-be faculty of the need for teachers at the school. Many days found Grandma Brown hobşbling about on her lame leg in the kitchen, kneading and baking the necessary daily bread.

And by the way, one person can make a difference. Today, that institution is known as Pacific Unişverşsity.

is a professional speaker, consultant and author of numerous books. Visit his site for more information, or to sign up for his FREE newsletter of Life, Love and Laughter at http://LifeSupportSystem.com.

Something To Think About

Question. At what point do we assume responsibility for our actions? (No harsh judgements required)

Jessica B. a crack addict who would sell the clothes off her back to get her next fix. Unlike the stereotypical addict Jessica grew up in a loving upper class family with all the material things a child could desire. Now that you know some of her background I'm sure you're asking, how did she become a drug addict? Frankly I don't know the answer to that question. However, when Jessica was asked she quickly blamed her parents for giving her everything she could want, according to her, she's faced with a lifelong struggle with a disease called drug addiction.

Hard to believe years earlier in high school Paul played on the baseball, football, and basketball teams each year, at the amazement of his coaches. So you're thinking, what happened? When the college of his choice didn't recruit him from high school he decided at that moment he would "take it easy" (pout). Ten years and nearly 200 pounds later he's still "taking it easy" (pouting) but now he's so large he can barely move from the chair to keep his therapist appointments. When asked how he gained so much weight he said, "I have a "disease" caused by being rejected (remember the college of his choice didn't recruit him) and there's nothing I can do about it."

The original question was, at what point do we assume responsibility for our actions? As you can see there's a growing trend to blame everyone for the situations we create on our own, be it conscious or unconscious, the blame gets shifted.

Are you like Paul and Jessica blaming others for problems or the reoccurence of the same obstacles that are created by your actions? Do you think the proper way of dealing with poor choices (by you) is to make them excusable "diseases" or mishaps beyond your control?

I was shocked by the emails asking is it ok to have sex and do leather spinsters have boyfriends. Decision making according to your terms has always been the theme of this newsletter and to read adults asking those questions just threw me. Regina I like how you handled them but I couldn't help but think these people are not getting the jest of the leather spinsters newsletter. Connie

Wow I had no idea you were receiving emails asking should I or shouldn't I on sex. What happened to being independent minded and doing what's best for self?Rachel

Regena those emails on leather spinsters, boyfriends, and sex are an indication of how confused our culture of women really are. Women are blasted daily with images, provocative images and and words of what behavior is acceptable for them and boy is it showing how many are stumbling in the dark. Naomi

Editor, I was a bit concerned with the response you gave

However, if you're being sexually active by your own free will and it's what you want to do not because he's pressuring you or society expects it of you, then in my opinion (for whatever it's worth to you) you're honoring yourself.

How is it honoring of self when she is asexual and having sex much less being involved with a heterosexual? Pilar

For starters let me dispell any notion of this publication being "anti-sex" because it's not. To honor yourself is simply you allowing yourself to do and feel in a manner that's appropriate and natural for you. If she's making a conscious choice to have sex and she feel it's the right action for her who am I to say otherwise. Believe it or not we know when we're not honoring ourselves by how we feel after decision-making (guilt, regret, remorse, depression, etc,,). I'm hoping readers of this publication are inspired to think outside of the proverbial box and live according to their needs and desires, because that's one way of knowing happiness.

For Your Information
No profits are gained nor claims are made by publishing this potentially helpful information.
LEARN KUNDALINI REIKI
Don't know what Kundalini Reiki is? Here's a site that explains and offers Kundalini Reiki training free for the asking. www.kundalini-reiki.net